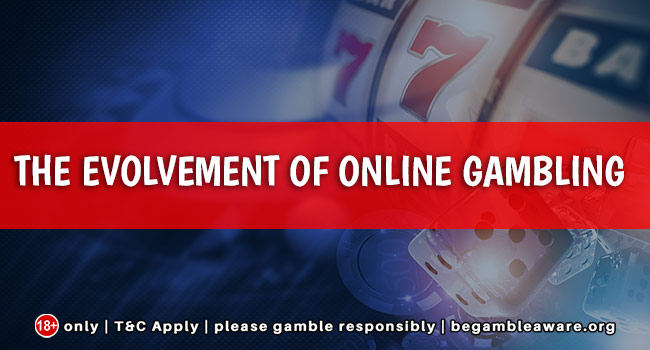 The Evolvement Of Online Gambling

The world of gambling we know today is in contrast to the one we knew over the last 2-3 decades. Though the core functioning lies in the same place, a lot of characteristics have departed from what they used to be. The current world is comparatively more open to this idea of online gambling and is even accepted in places, which were earlier very uptight about their regulations. Gambling and Internet betting has a far wider reach than its older counterpart and even the dynamics are no longer similar. Today, one can place bets and win jackpots from the solace of their home and their bean bag, probably in a country that prohibits ground gambling.

Let us all walk through the timeline of how gambling evolved with the advent of the internet and its accessibility to regular people.

It all began in 1994, when ‘Microgaming’, a small British company developed the first online casino and made an impactful stroke in the industry of gambling and IT. The very same year, in Antigua and Barbuda, a treaty was signed to legalise gambling on the world wide web.

CryptoLogic was founded this year, a company that focused on developing and providing software solutions for secured cash transactions.

As demand and interest increased among players, more than 15 companies were present in the industry at that time.

The advent of 1997 saw a major breakthrough in the market of online gambling and betting. The bookmaker, Intertops started accepting online bets on sports events.

By the dusk of the 20th century, newer and progressive slot machines began to come in and the first big jackpot was won. The same year, a failed attempt was made to prohibit online gambling in the USA.

The dawn of the 21st century marked a gigantic growth in the industry with supreme breakthroughs in online payments and a turnover of more than $8 billion at the beginning of 2000.

The Wire Act 1961 was amended and it was a sign that the online casinos will cease to operate in the USA.

Microgaming also developed a platform called eCOGRA(e-commerce Online Gaming Regulation and Assurance). It was an intermediate platform between users and gaming resources. The main goal of eCOGRA was to protect the rights and money of players.

Online gambling was more socially accepted and generated multi-million dollar deals for ambassadors and promoters, thanks to the support of WTO. Mobile gaming came into the picture and the industry was revolutionised further. A mind-numbing revenue was generated in this year through the industry.

Smartphones and iPhone emerged in the market. The first mobile card game was launched and online gambling saw a new surge in growth.

These years saw an influx of new games and gameplay techniques. The same year the USA reconsidered its stand on the issue.

Online casinos were legalised in most parts of the world by now. Over $10 billion dollars were spent on mobile phones games.

The first Bitcoin casino came to the market, called ‘Bitcasino’.

The introduction of HTML5 brought a new and better experience for mobile web pages and games.

The gambling world due to its online presence has changed a lot in nature, for example, it is simply more surprising and rewarding than on land gambling.

There are a plethora of games available now with great security and privacy.

Strict countries like Israel and the US have also adopted to online gambling and legalised it. As it is a great contributor to the tax system.

The future of online gaming seems to be extremely bright with exposure to VR gaming and live games with live dealers. In fact, gambling today is a mixture of luck & strategic playing.