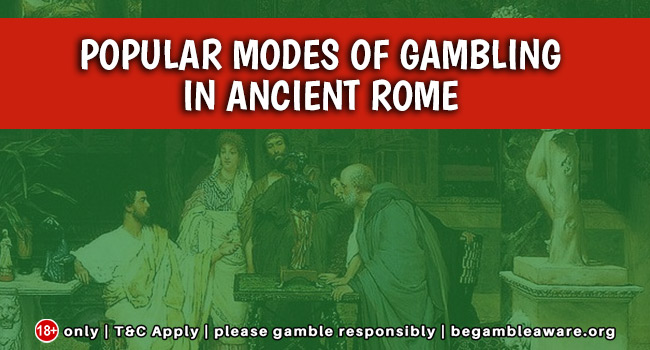 Man has been keen to gambling since the dawn of civilization. But have you ever wondered what is it that drives the human desire for gratification achieved when you combine game playing with the award of a prize based on luck? Whatever the motive, gambling remains a popular pastime across the ages and in the present day.

In recent years, online gambling has increased in popularity among players all around the world. This blog post will explain to you the popular forms of gambling in ancient Rome.

Gambling as a popular activity

The Romans were inveterate gamblers in the ancient world and all classes participated in the games of chance. During the time of the republic, gambling was prohibited in Rome except during the festival of Saturnalia. It was held in December of each year and was a celebration in the honour of Saturn (the Roman god of agriculture).  According to the myth, there was a time when Saturn reigned over the earth and provided remuneration for mankind.

The festival featured a day of public revelry followed by two days of private celebration with the roman household. It included a reserved meal where slaves dined with their masters and were even served by them.

The most popular games

online and mobile casinos have increased in popularity as they offer a wide variety of casino games with enticing casino bonuses. Games of chance were popular in ancient Rome too.

Dice playing was permitted as another kind of reversal as the unlawful acts were now permitted. Generally, there were two types: games played with only dice and games with dice and a board. The board contained pieces that were moved by throws of dice. It had 36 squares with symbols such as leaves, letters, squares and crosses marked on them. Three dies were thrown and the luckiest throw was three sixes. Pieces were moved backwards if the dice thrown showed one or more single dot.

Likewise, one of the most popular games was an early version of backgammon. It was also known as the game of twelve lines or the game of twelve signs. It was played using three cubic dice, and each player had 15 pieces. The earliest known mention of the game is in Ovid’s Ars Amatoria. An ancient example of the game was excavated at the archaeological site of Kibrya in southern Turkey.

The game of brigands was another famous game of that time. It was a two-player strategy board game, and it is said to resemble chess or draughts. It had pieces of glass in different colours. The winner was the player who bagged the highest number of pieces, after which he was named the “King”.

Knucklebones were used by Romans in the form of two types of games. One was a game of skill and the other type was a game of chance. Originally the knucklebones were those of a sheep, which were thrown up and caught in various manners. Modern knucklebones comprise six points and are usually made of metal or plastic. The winner is the first player to complete a prescribed series of throws. The simplest throw consists of either tossing up a stone or bouncing a ball and picking up stones or knucklebones from the table while it is in the air. This continues until all five knucklebones are picked up. Another throw consists of tossing up one stone first, then two, then three and so on, and catching them on back of the hand. Different throws have distinctive names, such as “riding the elephant”, “peas in the pond” and “frogs in the well”. Casino reviews can give you an in-depth view of these variants.

Except on some special occasions, gambling was generally forbidden in Rome. As it was impossible to ban the gambling activities completely, the betting was legal only during the Saturnalia festival. That was the time when everybody could gamble to their heart’s content. The event was the only opportunity when the slaves and their masters gambled together. Before the gambling was strictly forbidden, Roman people could gamble inside their homes or at public houses that were opened for such entertaining occasions.

These laws never stopped people from gambling and inspired writers of satire to criticise the emperor’s weakness for games of chance. However, citizens of Rome continued to try their hands at gambling.