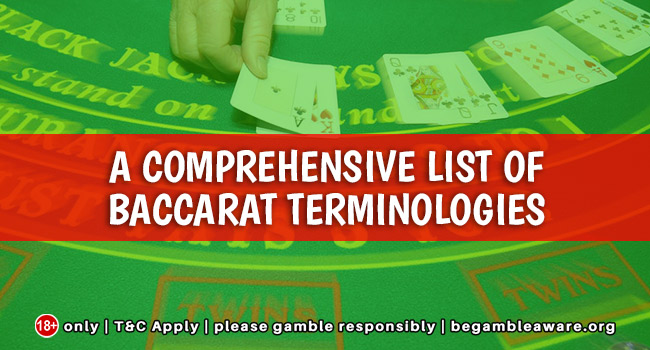 Baccarat is another famous casino game that has been around for decades. It’s not sure where exactly this game comes from because there is evidence in both Italy and France suggesting its beginning. So, considering that the origin of Baccarat is related to various countries around the world, it shares many jargons and phrases.

If you’re a casino player and planning to play Baccarat variants, it is essential to learn its terminologies and meanings unless you don’t want to look like a lost puppy when the dealer and the other players talk to you. Here is the comprehensive list of Baccarat terminologies used in land-based or online casinos.

Baccarat is a table game that uses 6-8 decks of cards and is also known as Punto Banco. The ultimate aim of this table game is to place a bet on either the player or the dealer’s hand value adding to the total amount of 9.

The word Banco is derived from the Spanish meaning ‘Bank’ or ‘Banker’ and is sometimes referred to the dealers.

Banker bet is one of the three options given to the players where they can place a bet on the dealer.

Bankroll is the amount of money you plan to spend on your gambling.

Burning refers to when the dealer removes the top 3 to 6 cards after the shuffling right before commencing the game.

A Caller refers to the casino staff who is responsible for the cards at the Baccarat table.

Carte is derived from the French word that is used for requesting an extra card from the dealer.

This is one of the best Baccarat variants which is better known as European Baccarat. This variant is aimed at high rollers, and one of the players takes responsibility for dealing the cards, taking all bets and playing the role of a dealer. It is also known as “Railroad”.

This is another French-derived word that refers to a round of Baccarat which comprises of a banker’s hand and a player’s hand.

It refers to the act when a deck of card is divided in half after shuffling and then combine back.

A special plastic card used for cutting the deck after the cards have been shuffled.

Dealers are the casino staff members who are responsible for drawing cards at the Baccarat table. In some cases, a player may also act as the dealer.

Discard tray is used for holding the cards after the game for some reasons.

Also known as a hole card, this card is a card which is faced down.

It’s a bonus given to a chosen player when they make Side bets and win by at least four points.

Face cards refer to all the cards that have portraits on them – Jacks, Queens, and Kings.

The term ‘Fading’ is used only at land-based Baccara games and is a term used for placing bets.

When the gambler wages the same amount even if the hand is winning or losing is called Flat bet.

House edge refers to the advantage the casino has over the player.

Ladderman is one of the casino employees who are responsible for monitoring games or several games of Baccarat from the tables.

Derived from the French word meaning ‘The big one’. Le Grande refers to a natural Baccarat while totals to nine.

Another French word which means ‘The little one’ when translated to English. It refers to a natural Baccarat that totals eight.

Marker is a piece of paper where you sign it to borrow money from the casino.

A tinier version of the standard Baccarat table where it can take up to 7 players. In this version, the cards are dealt face up if you play online but dealt face down if played on a land-based casino.

A jargon used to refer a face card or a ten.

Natural refers to the two cards you have been dealt with whose total is either eight or nine.

Palette is the long wooden stick croupiers use for moving cards during the game.

When a bet placed is neither winning nor losing, it is called Push.

When the dealer performs an early shuffling of the cards, it is called Shuffle up.

When the player and the bank are both locked in a tie, it is called a Standoff.

Upcard refers to a card when turned face up.