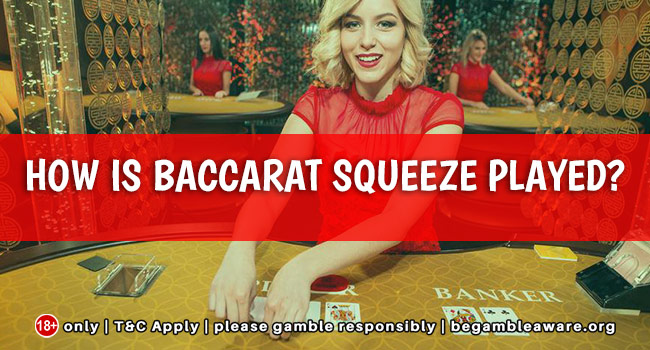 How is Baccarat Squeeze played?

Card games are not unfamiliar to us. It is one of the most played games worldwide and still stands at the top at both land and online casinos. Among the card games, Baccarat is extremely popular amongst players, and the game variants are provided by leading game developers, where they endeavour to create the games with a modern touch and realistic appeal. Baccarat is basically a table game where players and the dealer compare their cards. The game is easy to understand and play and offers high winning scopes. There are several varieties of Live Baccarat games, and one of them is the Baccarat Squeeze, in which the dealer reveals face-down cards from time to time, which adds to the excitement and fun of the gameplay.

What is Baccarat card squeezing?

Unlike other Baccarat games where the dealer deals two face-up cards to both the player and the banker, in Baccarat Squeeze, the dealer deals the card face-down. The croupier then exhibits the cards one by one by slowly turning them over and revealing a small part of it. Depending on the bets placed by the players, the dealer squeezes the cards with the highest total wager first, then presents the remaining hand.

The live-streaming of this game is done with a broad-angle view that helps capture all the details of the casino studio. Several cameras are installed at various angles to exhibit every gaming viewpoint in-depth to the players. The first camera is used to zoom in when the dealer squeezes the cards. The second webcam displays the visual of the dealer, and the third camera shows a close-up view of the hands dealt by the dealer. The streaming is done in high-quality display and audio sounds, giving players a realistic land-based casino appeal. Players can change the video quality anytime from the given options on the screen.

The dealer stands behind a bean-shaped table which is placed at the middle of the front camera angle. The table is designed with a wooden border and a patterned mustard fabric, where the interior of the studio reminds of the ancient Chinese casinos.

The game rules of Baccarat Squeeze is simple, but it comes with a consequence – you do not get to choose your own moves in the game. This is because every action is decided by the hand the player is dealt with. This can be confusing since the reaction of the dealer depends on the outcome of the player’s hand. Here’s a straightforward explanation for you:

If a player gets a total card between 0 to 5, he/she will draw a third card. If their total is 6 or 7, they will not obtain a third card.