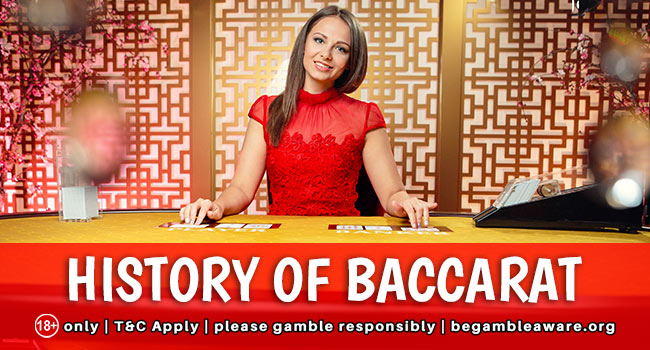 The popular casino game of Baccarat has a fascinating history which almost dates back to more than 500 years. It is speculated to have originated in Italy and introduced in France around the year 1490. An Italian gambler named Felix Falguierein is credited with the invention of the game.

The game was played with tarot cards initially before being replaced by the 52-card decks and the game’s name originates from the Italian and French word for ‘zero’. This refers to the fact that all tens, jacks, queens and kings have a value of zero. It also refers to any hand that has a total of zero so, for instance, a hand of seven and three also equals zero and so, Baccarat too.

The Baccarat game in its early days was considered as a game of aristocrats and rich gentlemen. This game was known as Chemin de fer in France, while the English people called it Punto Banco.

As the game travelled through various countries and continents for centuries it acquired different rule variations. The game is found in almost every part of the globe today. However, in the beginning, the French variation of Baccarat “Chemin de fer” was popular in England, where the rules and name of the game were changed to “European baccarat”. In comparison to the original Baccarat, this version has a few major differences that concern the established rule for drawing an additional card. In European Baccarat, players have the chance to draw an extra card on five. The banker, who in this case is a representative of the respective casino, can also choose to take advantage of this option.
There have been three versions of the game that have remained popular. These are Baccarat Chemin de Fer, Baccarat Banquet and Punto Banco. Chemin de Fer, meaning ‘iron road’, was the original version of the game. Punto Banco is the game played in the majority of casinos, where the casino banks the game at all times and both hands are dealt according to fixed drawing rules.
All Baccarat variations have the same rules, while the way of dealing cards sets them apart from one another. Despite a few changes to the rules of the game in every country, the style of the game has remained the same.

Though the game had entered America at the end of the 19th century due to the migrant English and French citizens, it was not very popular there at that time. After the game came to be rechristened as Punto Banco in Cuba, it stayed there till the 1950s until a casino player and writer, Tommy Renzoni brought Baccarat to Las Vegas where the game had a rebirth as the North-American Baccarat.

Several other variations of the Baccarat game like Mini Baccarat started appearing due to the increased interest of Americans in the game. Mini Baccarat had lower table limits and simplified rules that attracted mass players. History was made in November 1959 when the first Punto Banco table was opened at a Las Vegas casino.

Baccarat was known as a game for aristocrats due to its high betting requirements and the secluded Baccarat rooms at land casinos. While people enjoyed watching James Bond play Baccarat in the movies, few people actually played the game themselves.

Later, it changed with the creation of the online casino in the 1990s where the low betting minimums, made online Baccarat accessible to anybody who enjoyed playing a good card game.
Easy search, nice bonuses and quick access make online Baccarat one among the most popular and loved casino table games.

In online casinos, the cards are dealt with by a random card generator and are displayed on the screen in their graphical form in the online version of the Baccarat game.

The online casino operators also offer the Live version of these Baccarat games which are conducted by the real dealers and relayed over the internet using HD video streaming technology. Today, the online and Live Baccarat games can be played of different device platforms such as desktop, smartphones and tablets.

Almost every online casino offers Baccarat which signifies its popularity. It is also among the most popular live games, wherein it is possible to play the game in real time with a professional dealer as well.