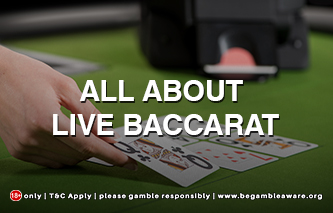 Everything you need to know about Live Baccarat

Live Baccarat may be a simplistic game to play, but the rules for dealing are somewhat inflexible. In this game, the cards whose value is lower than 10 will be taken at the value that they represent (i.e. a value of 5 is taken as 5) and it must be noted that Aces have a value of 1.

The suits of the playing cards have no significance in Live Baccarat with only the single digit cards being valid. If there is any count that gets to a double-digit, the left digit will be excluded. So, for example, 13 will be counted as 3 and 17 will be counted as 7. For a single hand, players will not have more than a total of three cards, no fourth card is dealt with in accordance with Live Baccarat rules.

You start off by betting either a Tie, Player, or Banker. The Player and Banker will pay an even amount of money. However, a Banker bet that results in a win will attract a 5% commission. The Tie bet has a payout ratio of 8:1. The general objective of Live Baccarat is for a player to attain a hand with a total face value of 9.

The Live Dealer deals two cards for both banker’s and player’s hands. A 3rd card might be dealt with in accordance with the rules of the game as discussed later in the article.
Understanding the Third Playing Card Rule for The Player

Where the Banker or Player has a total card value of between 8 and 9 for the two cards that they are initially dealt, there will be no need for a third card to be drawn.

The Third Playing Card Rule for The Banker

The hand (i.e. Banker or Player) that has a total card value of 9 without exceeding this number or the hand that is the closest to this number turns out to be the winner.