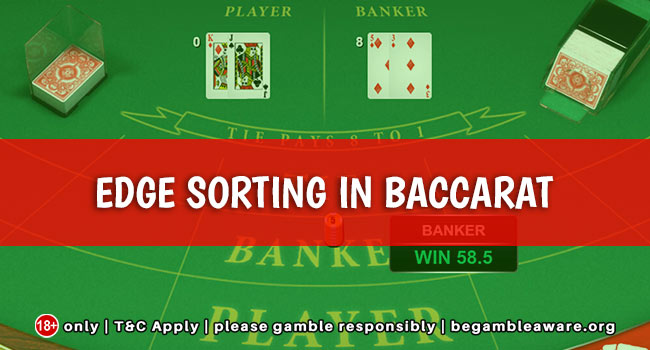 Recently, edge sorting has got a lot of press because poker superstar, Phil Ivey has been accused of using the technique to win millions of dollars from a casino in New Jersey and London. Being able to identity cards when they are face down is a huge advantage in casino card games like regular and Live Baccarat and Blackjack. Edge sorting is a way to do exactly that.

Edge sorting works because the patterns on the backs of many decks of cards even once used in casinos are not perfectly symmetrical on every card in the deck. Let us take an example of two unsymmetrical cards. One edge shows that the diamonds are cut in half and the other shows the full diamond. It means that a trained eye can tell the difference between opposite edges of the cards.

Now, imagine that you can sort the deck so that certain important cards are pointed one way and all the others are pointed the other half. If you could pull that off, you would be able to identify the next card to come off the deck of cards that are already face down on the left.

How to use edge sorting to improve Baccarat strategy?

Edge Sorting is able to offer the player with an edge of 6.79% over the house. The game of Baccarat is played among 14 players and the betting places are marked with the numbers 1 to 15. Number 13 is not used due to superstitions. To place the bets, the table is marked with three boxes in front of the number of every player. There is a box for both the banker as well as the player and another one is present for the tie bets. Depending on the casino, a Baccarat game is played with  6, 8 or 9 decks of cards.

The main objective of the game is to reach as close to 9 points as possible. The card of Ace is valued at 1, King, Queen, Jack and 10 are valued at 10 and all cards from 2 to 9 are valued at their face value. Due to this, numbers 6, 7, 8 and 9 automatically become the most vital cards of the game. Edge counting is particularly useful in this situation as the player will be able to guess which cards belong to which group of cards and decide whether or not he should place his bet on the banker’s or player’s box.

Obviously, casinos aren’t gonna let you sort the deck before you play with it. That’s why players using this technique have to get pretty creative. In Phil Ivey’s case, he was playing Baccarat and since he’s known as a high stakes gambler, he was able to talk to the casino into giving him special treatment and unknowingly sorting the deck for him. So, what was his Baccarat strategy? He requested a specific type of Borgata playing cards and that the casino uses the same 8 deck shoe for his entire session. He also asked for an automatic shuffling machine and most importantly, he even got them to agree to turn certain dealt cards 180 degrees because he told them he was superstitious. Right now, the Borgata casino in New Jersey is suing him for almost ten million dollars he won back in 2012 because they say he was using the edge sorting technique but there are tonnes of easy for casinos to stop players from edge sorting. They can use perfectly symmetrical decks or use new decks every time they deal or incorporate a turn into their shuffle procedure that’s when half the deck is turned 180 degrees before being shuffled effectively destroying any sorting that has already been done.

Edge Sorting has been now officially considered as cheating. Although Ivey tried to woo the authorities by labeling the technique as ‘legitimate gamesmanship’, in the end, he lost both the cases to the casinos (Crockfords and Borgata). So, in short, don’t try to learn Edge Sorting for now if you are not familiar with it. It is almost similar to card marking and takes advantage of the card flaws which is deemed illegal by the authorities.