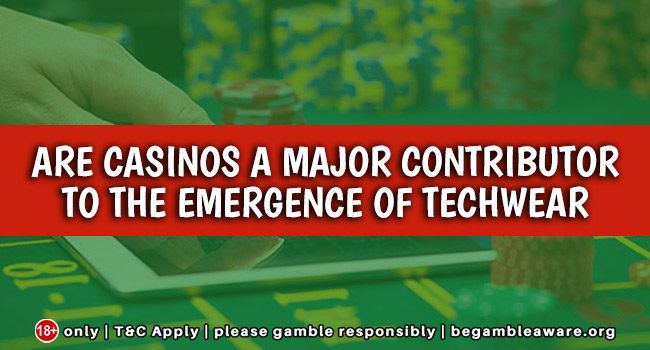 Are Casinos a major contributor to the Emergence of Techwear

Advances in microtechnology have made it possible to develop wearable tech devices with incredible processing power. From smart watches to heart rate monitors, and augmented reality glasses to virtual reality goggles, this tech wear’s being hailed as the future of smart technology.

A Peek into History

In 1961, Edward Thorp, the famous card counting savant and his friend Claude Shannon, the two decided to focus on the system that would significantly decrease the house edge in casino Roulette. The team put their heads together and designed a miniature wearable computer. This amazing device would track abnormalities in the Roulette wheel and tell the wearer which numbers the ball would land on more frequently.

It just goes to show what a little harmless greed can lead to. These technologies were virtually unheard of back in the 60s and 70s.

Eventually, the pair created a computer that was about the size of a pack of cigarettes and used their toes to input data. The computer didn’t give the pair an exact number to bet on but instead used tones to signal what portion of the wheel the ball was likely to land on.

The scheme worked, though Thorp and Shannon had enough technical problems (mostly with broken speaker wires) that they could not make a serious effort to fully exploit their advantage. Still, it was clear that the computer had worked brilliantly: later groups would report advantages of about 44 present over the casino using such a device.

In 1985, Nevada, seeing the problems developing due to the increasingly widespread use of such devices, passed a law that banned the use or possession of devices used to predict the outcomes of casino games.

If the computerised device was used correctly, it would give the player a massive 44 per cent advantage over the house in any Roulette game. The illegal device was widely used with high rates of success for over 10 years.

Throughout the 60s and 70s microtechnology was used in casinos all over the world. Eventually, the casinos did catch on and banned all computer or technology devices that could predict odds or aid in card counting. From these illegal beginnings, the idea of wearable computers soon spread across the globe.

In 1994, the world’s first headgear webcam was unveiled; leading to the development of even more technologically advanced wearable technology. Today, tech wear has become commercially available and more powerful than ever. Smartwatches can now be used to access the internet and play online slot games from anywhere in the world.

High tech wrist bands can track your movements and monitor your health creating detailed medical reports without any external intervention. In a world where smart technology is advancing at an astonishing speed, tech wear has the potential to completely revolutionise how we interact with the world.

Other products changed the world in ways that still benefit society today. While they might not immediately come to mind when you think of wearable tech, there’s no doubt that digital hearing aids – first released in 1987 – have helped numerous people enjoy a higher quality of life. Sure, back then they were unpopular due to their size and technological limitations, but over time these hearing devices became smaller and more efficient, and few look twice when they see such devices today.

What they can do

Soon after the dawn of the 21st century, the wearable tech had become a part of everyday life for large numbers of people. In 2000, Bluetooth shipped its first wearable headsets.

As with any emerging technology, there have been several issues with wearable tech as we try to figure out just how it’ll fit into today’s society. Most notably, these issues have played out with Google Glass – a product that has seemingly annoyed as many people as it has amazed.

As wearable technology continues to develop, it will pose new and difficult challenges for casinos to deal with. But in some ways, they have an easier job now than they did when Ed Thorp first shocked them with his wearable computer over fifty years ago.

Not only are technologies like Google Glass more visible than his concealed device, but the law is now on their side: after all, when Thorp first used his computer to beat the casino at roulette, he wasn’t even doing anything illegal in the process.

Today, techwear is all around us. Everything from Fitbit and Nike+iPod to Google Glass and the Apple Watch is revolutionizing the way we interact with technology. And with online casinos more popular than ever, there’s no limit to what gadgets could be coming up next. Some casinos have already made it possible to play on your smartwatch!

Name: Are Casinos a major contributor to the Emergence of Techwear
Author: Stanley Roberts
Published Date: 18/09/2019